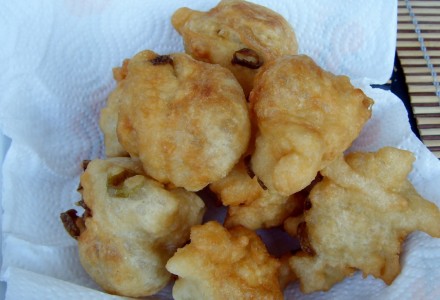 From Puglia. Pettole are sweet or savoury doughnuts. In the region of Campania , and I believe the US, they are known as zeppole. Here in Puglia, zeppole refers to a cake traditionally eaten on St Joseph’s day. They are called pettole here in Puglia and some regions of Basilicata. They are traditionally eaten on St Martin’s day in Lecce (Nov 11), St Cecilia’s day in Taranto (Nov 22),  Around the immaculate conception on the 7th and 8th of December in Brindisi, and Christmas Eve in Foggia. They are generally eaten during the Christmas period throughout the region. They can be prepared in two ways, sweet or savoury. The savoury version can be plain, or contain other ingredients, such as olives, cooked cauliflower, salt cod , sundried tomatoes and anchovies. The sweet versions are dredged in sugar and/or dipped in vincotto a sweet, concentrated grape juice produced in Puglia. Honey or jam are also common if you can’t find vincotto.

Dissolve the yeast in the water. Mix together the water and flour. Add the salt at the end of mixing. You should have a very wet dough. If you are making the savoury version, stir in the olives.

Cover with cling film and leave in a warm place to rise for about 2 hours. 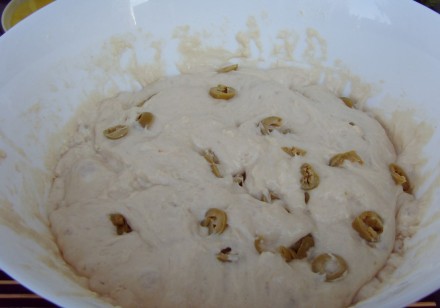 Wet your hands and scoop up about a tablespoon of dough and deep fry until it is lightly brown. You will need to turn them halfway through cooking. Drain on kitchen paper.

If you are making the sweet version, dredge each pettole in sugar and serve with a dish of vincotto or honey to dip them in. 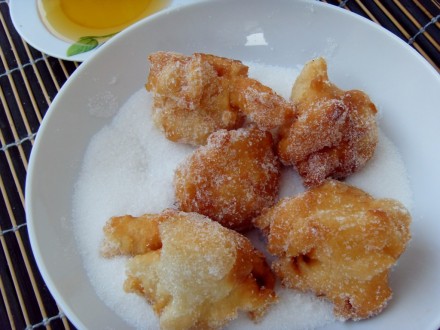