Zuppa di aglio. Versions of this soup exist all over the world. I used to live in the Czech Republic and česnečka was said to be a fantastic cure for a hangover 😉 It is best made with new season “wet” garlic, but regular dried garlic will give good results. Use very good stock, it will be so much better than cubes. It can easily be made vegetarian by using vegetable stock and a vegetarian cheese. Serves 4.

Pizza di patate e prosciutto. From Bari. This is a more complicated version of the traditional potato “pizza”.  They call it a pizza here, but that name is quite confusing as it does not contain any bread or flour. To confuse matters further it is also known as Torta di patate or Gateau di patate in various regions. It is basically a potato pie filled with ham and spinach. The ham can easily be left out to make it vegetarian (if you are careful about what cheese you use of course). It can be eaten warm or cold and will keep in the fridge for 3 or 4 days. It also freezes well. Serves about 8 as a main course. 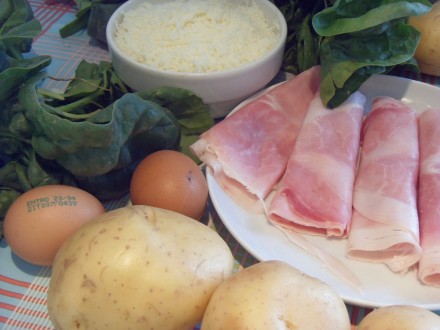 Cook the potatoes in their skins in lightly salted water. Drain and peel when cool enough to handle.

Mash the potatoes and mix with the egg yolks and parmesan.

Fry the whole garlic clove for a few minutes in a little olive oil. Remove and add the spinach. There should be enough water clinging to the leaves after washing. Add a little salt and couple of grates of nutmeg. Cook over a medium heat until the spinach has completely wilted. Leave to cool and squeeze out as much water as possible. 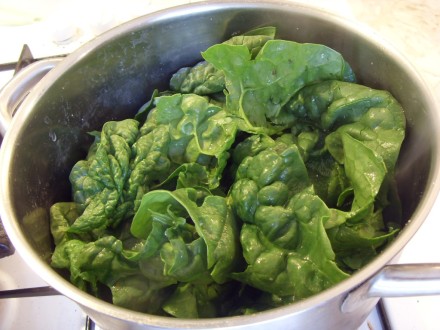 Grease a 24cm cake tin and dust with bread crumbs. Use 2/3 of the potato to make the base of the pizza. Build up the sides a little to contain the filling. Add the spinach.

Cover with the cheese

Close the pizza with the remaining 1/3 of the potato. Cover the top with bread crumbs and dot liberally with knobs of butter.

Potato pizza ready for the oven

Bagna caôda.From Piemonte. The rough translation of title is “hot bath” , which in my opinion is always preferable to a cold one 🙂 This dish is well known outside of Italy, but as is often the case it often is very different from the original. It is basically a warm anchovy and garlic dip for raw vegetables. These are two of my favourite things, so it’s one of my favourite antipasti. A lot of versions include milk or cream, but these are not found in the original Piemonte version 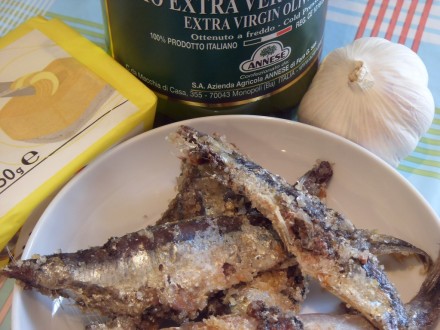 To serve, dip vegetables into the mixture. The recipe I have is very prescriptive and says you can only use vegetables that are in season and grow in Piedmont. I think this is going a bit far though. Some suggestions on what to serve with the Bagna Cauda (raw unless otherwise stated):-

Slice the garlic very thinly and soak it in cold water for a couple of hours. Some recipes call for it to be boiled in milk, but I think this is unnecessary.

Add all the ingredients to an earthenware pot along with a small ladle of oil and cook very slowly for about half an hour. Don’t let the garlic brown. Stir it constantly with a wooden spoon. When the anchovies and garlic have dissolved into the sauce, add the rest of the oil.

Bring the pot to the table and keep it warm with some kind heat source.  You can buy special pots for this purpose, but fondue sets work well. Serve it with your selection of vegetables.

When you have had your fill of vegetables you can add a beaten egg to what’s left in the pot.

From Piemonte. In my experience the bread you can buy from a good baker is usually a superior product to home-made, unless you have a  great deal of time to invest and a very good oven. Here in Italy very few people make bread at home. Focaccia and other bread like products are another thing though. It is quite easy to make grissini, or breadsticks,  at home and they will usually be much better than the shop bought variety, especially outside of Italy. The original recipe is from a baker, so has been scaled down drastically, by a factor of about 10. The quantities and proving time are not extremely sensitive, so you have a bit of leeway. 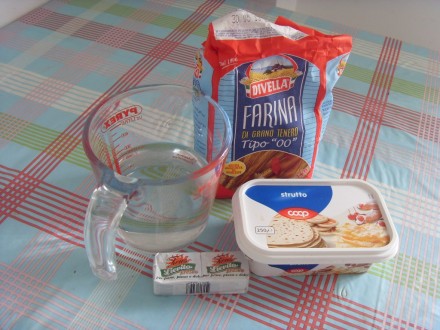 Mix together the flour, salt, malt, yeast and lard. Add water, little by little, until you get a soft pliable dough. Make sure you knead it well.

Form into a rectangle about 15cm long by 3cm deep. Cover with a clean towel and leave to prove for about 2 hours.

Cut the dough into 2cm strips and stretch to make the grissini shapes. I prefer them quite chunky, but remember that they will about double in size in the oven. 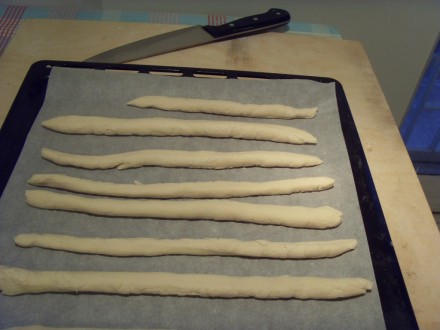 Grissini ready for the oven

Panzerotti. From Bari. These are one of the most famous and popular dishes from Bari. They are deep fried pockets of dough stuffed with a variety of fillings. Two of the most common are mozzarella, cherry tomatoes and oregano and ricotta forte (also called skuanda), cherry tomatoes, onion and anchovies. Ricotta forte is a bit of a “Marmite” ingredient. By that I mean it is very strongly flavoured and you either love it or hate it.  I am in the first camp, lovely stuff. Rather than cherry tomatoes, “appesi” are more traditional. These are small tomatoes which are picked when still not completely ripe and hung up for later consumption. As these are hard to find, you can use any type. I went to a party here and a lady was employed just to make panzerotti all evening. The last round was filled with Nutella! The size of the panzerotti varies, but I made 12 with this recipe. 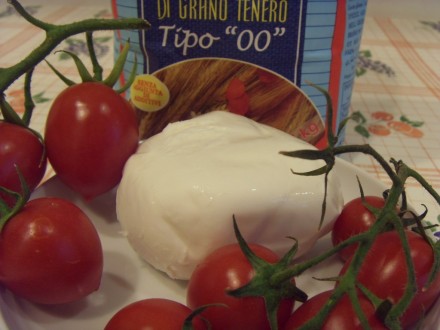 Dissolve the yeast in the milk. Add the milk to the flour, oil and salt along with enough tepid water to make a smooth dough.

Oil the dough, cover with a tea towel and leave to rise for up to 2 hours.

Separate the dough into 12 portions and roll into small balls. Cover with a tea towel and leave to rise for a further half an hour. 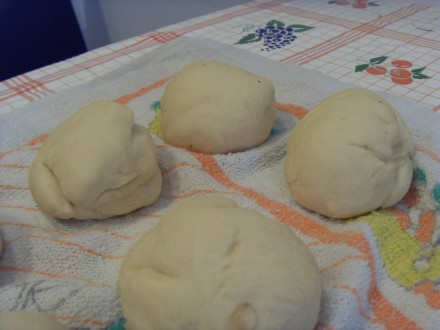 Take one ball of dough and roll it into a large disc. Place a large tablespoon of filling in the middle of each one. Fold the dough over to form a half moon shape. Press down well and try to exclude as much air as possible. Either fold over and crimp the edges or cut off the excess pastry with a pasty wheel and seal the edges with a fork.

Deep fry the panzerotti until they are lightly golden. Some people use extra virgin olive oil and some people use regular vegetable oil. You can also bake them in an oven at 200 °C for 15 minutes, but the result is quite different.

And of course the very untraditional but popular with children young and old:- 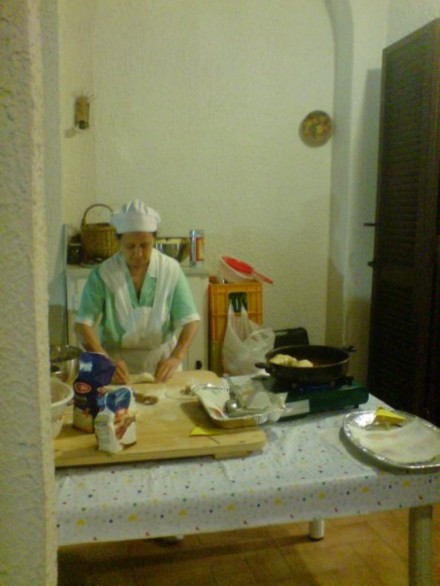 Peppina at the party

Pizza di cipolle. From Bari. This is another “pizza” that is in fact a pie or calzone. This can be made with “long onions” which I have never seen outside Italy, but this recipe uses white onions which are easy to find. Indeed if you can’t find then I’m sure you would get good results with other types of onion. There are versions without the olives and/or anchovies so feel free to leave them out if you prefer. The dough is made without yeast so it is very quick. Serves 6 to 8.

Lightly seson and fry the onions in a little oil until they are soft. Add the tomatoes, olives and anchovies and cook for a further few minutes. Remove from the heat and stir in the Parmesan.

Mix together the ingredients for the dough with enough water or wine to make it smooth. Leave to rest for about half an hour.

Grease a pizza tin  with olive oil and dust with a little flour.

Onion pizza ready to be filled

Roll out half of the dough so it fits the tin. 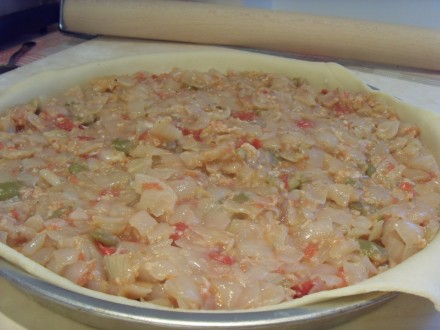 Fill the tin with the onion mix.

Roll out the other half to make the top of the pie. Place on top and trim the edges. Cover the top with a little olive oil and pierce with a fork to allow the steam to escape. 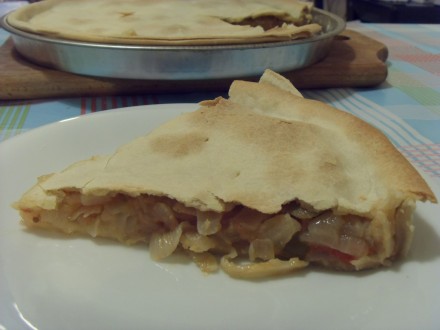 Pizza mozzarella e ricotta. From Puglia. This was cooked for me last week by the mother of a student. Hers of course was better, but mine wasn’t bad either 🙂 It is called a pizza here, but it is actually a type of pie or calzone. Serves 6

Update: Mrs C Looked at the recipe and said it is slightly different than the one she uses. She adds 100 g of salami or 100g of mixed mortadella and ham cut into small cubes. She uses nutmeg instead of pepper and gives the dough 1 hour to rise. Finally, she doesn’t drizzle olive oil on the top. Many thanks. 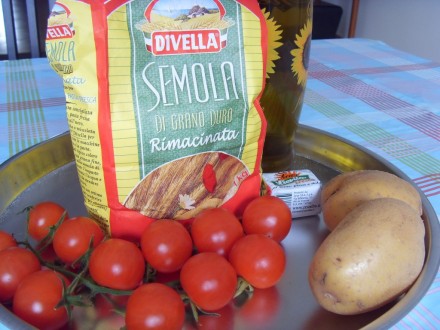 Focaccia alla barese. I have never really had much success with bread in my cooking career, so I decided to give it one more go. It actually came out really well. The main differences between Bari focaccia and regular focaccia is the use of coarse hard flour (semola rimacinata di grano duro) and the inclusion of potatoes in the dough. There is also no olive oil included within the dough, only in the tin and poured over the top. I just caught it before it burnt, so it looks a little dark. See the recipe for some advice on how to avoid this.

Variations. A lot of people also sprinkle dried oregano over the focaccia after the tomatoes have been added. You can use pitted olives as well as, or instead of, the tomatoes.

This dish can be eaten hot or cold. If you like you can use some of the sauce with some pasta  as the first course. Polpettone al sugo is eaten all over Italy. Serves 8